Bishops of the Diocese of El Paso 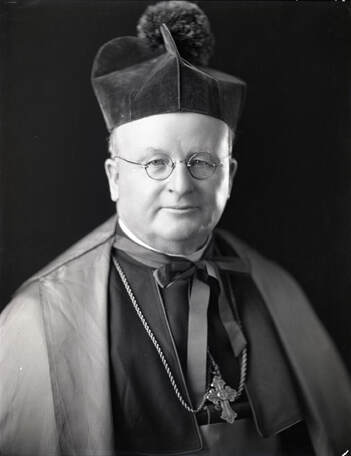 Anthony J. Schuler, bishop of the Catholic Diocese of El Paso, was born to Joseph and Albertina (Algaeir) Schuler on September 20, 1869, at St. Mary's, Pennsylvania. From there the family moved to Georgetown, Colorado, in 1876. After his father's death from a mining-accident injury in 1883, young Schuler became increasingly attached to the local priest, Rev. Nicholas C. Matz, who later became bishop of Denver. In 1885 Schuler followed Matz to Denver upon the latter's reassignment, both to assist the cleric and to further his own education. In Denver, Schuler came into contact with priests of the Society of Jesus, commonly known as Jesuits, and he subsequently decided to join their order. He entered the Jesuit novitiate at Florissant, Missouri, on December 7, 1886. His lengthy training included studies in Florissant, St. Louis, Missouri, and Woodstock, Maryland, as well as work at Sacred Heart (later Regis) College in Denver. Sebastian Cardinal Martinelli, Vatican apostolic delegate to the United States, ordained Schuler a priest at Woodstock on June 27, 1903. Thereafter Schuler returned to Denver and Sacred Heart College, where he served as prefect and, later, superior. In 1908 he was sent to El Paso to work as associate pastor at the Church of the Immaculate Conception and chaplain of both the Hotel Dieu Hospital and Holy Family chapel. In 1912 he returned to Denver, where he worked in various assignments for several years.

Meanwhile, El Paso and West Texas continued to grow. In 1880 El Paso had no Catholic church; worshippers had to cross the Rio Grande to attend services. But by the beginning of World War I the city had 10,000 Catholics and six churches. This growth had largely been overseen by Jesuits under the supervision of Carlos M. Pinto, S.J. The Vatican established the Diocese of El Paso on March 3, 1914. The new diocese covered more than 60,000 square miles and included fourteen counties in West Texas and five more, plus part of another, in southern New Mexico. It included some 54,000 Catholics served by thirty-one priests in twenty parishes, fifty-eight missions, and a number of hospitals and schools. Although Schuler is commonly spoken of as the first bishop of the new diocese, that distinction in fact belongs to a fellow Jesuit, the Rev. John J. Brown, rector of Sacred Heart College in Denver. Brown was appointed in January of 1915 but resigned due to poor health in June of that year, before his consecration as bishop. Schuler was subsequently appointed bishop on June 17, 1915, and consecrated on October 28 in Denver by Archbishop John Pitaval of Santa Fe. Schuler served as bishop for twenty-seven years. Early in his tenure he built a number of churches in El Paso, including Holy Family (1914), St. Joseph's (1916), St. Patrick's Cathedral (1917), and Sacred Heart (1917). He also oversaw the foundation of Loretto Academy (1923) and a diocesan high school for boys (1924) that was operated by the Brothers of the Christian Schools. 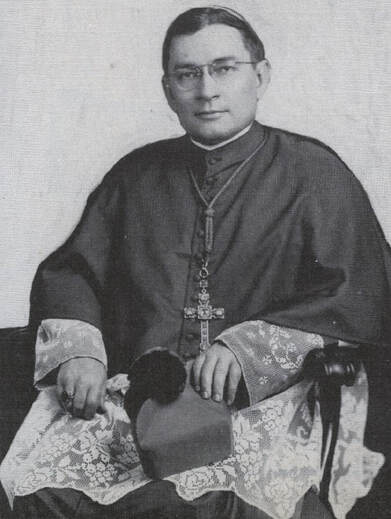 Born in Fredericksburg, Texas, Sidney Metzger studied at St. Joseph Seminary in San Antonio and the Pontifical North American College in Rome. He was ordained to the priesthood on April 3, 1926. During his studies, he obtained a doctorate in Sacred Theology and in Canon Law.

On December 27, 1939, Metzger was appointed Auxiliary Bishop of Santa Fe, New Mexico, and Titular Bishop of Birtha by Pope Pius XII. He received his episcopal consecration on the following April 10 from Archbishop Arthur Drossaerts, with Archbishop Rudolph Gerken and Bishop Mariano Garriga serving as co-consecrators.
​
Metzger was named Coadjutor Bishop of El Paso, Texas on December 26, 1941. He later succeeded Anthony Schuler, SJ, as the third Bishop of El Paso on November 29, 1942, ending the twenty-seven-year-long Jesuit rule of the diocese. As Bishop, one of Metzger's challenges was to restore diocesan financial stability whilst creating new parishes and ministries for the growing Catholic population. He also established St. Charles Borromeo Seminary in 1961. From 1962 to 1965, Metzger attended the Second Vatican Council.

After thirty-five years of service, Metzger resigned as El Paso's bishop on March 17, 1978.

On 5 May 1970 he was consecrated a bishop by Archbishop Luigi Raimondi. He was appointed auxiliary to the archbishop of San Antonio. Also in May 1970, Flores was appointed chairman of the Texas State Advisory Committee to the U.S. Commission on Civil Rights, and that July he became national chaplain for the League of United Latin American Citizens. In 1972, he was co-founder and honorary chairman of the Mexican-American Cultural Center in San Antonio.

In 1980, Flores became a member of the Hispanic Caucus Committee, and in 1981, he founded Catholic Television of San Antonio, the first diocesan television station in the United States. In 1997, when Billy Graham headlined a religious crusade at the Alamodome, Flores taped radio spots in English and Spanish to promote the event. Graham later credited Flores for the large response from the area's largely Catholic Hispanic community.

Flores' suit against the city of Boerne, Texas in his bid to expand St. Peter's Church there led to the landmark U.S. Supreme Court decision City of Boerne v. Flores (1997), which struck down certain provisions of the Religious Freedom Restoration Act of 1993 as unconstitutionally exceeding the powers granted to the Congress under Section Five of the Fourteenth Amendment.

His motto is Laborabo non mihi sed omnibus, "I will work not for myself but for others". 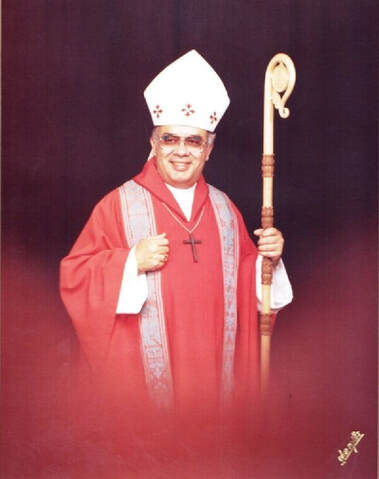 Born in Corpus Christi, Texas, he was the son of Cosme A. Peña and Elisa Ramon Peña. He attended St. John’s Seminary, and Assumption Seminary, both in San Antonio, Texas. He was ordained on 25 May 1957 at Corpus Christi Cathedral by the Most Reverend Mariano S. Garriaga, D.D., LL.D.
​
On 16 October 1976, he was named Titular bishop of Trisipa and Auxiliary to the Archbishop of San Antonio. In 1979 he served as Administrator Sede Vacante for the Archdiocese of San Antonio.

In 1980, Peña was appointed Bishop of El Paso, serving for 15 years until his installation as Bishop of Brownsville in 1995. He submitted his letter of resignation to the Congregation for Bishops upon reaching 75. His resignation was accepted when Pope Benedict XVI, named Auxiliary Bishop of Detroit, Daniel E. Flores as bishop in his stead. 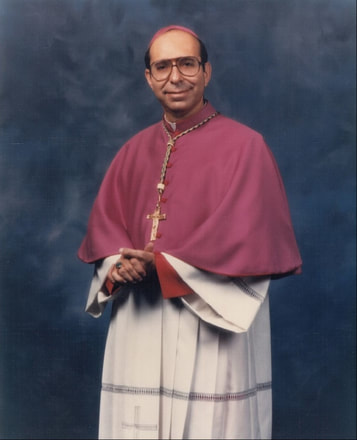 Bishop Armando Xavier Ochoa was born in Oxnard, California, in 1943, the second child to Angel and Mary Ochoa. He received his education at Santa Clara Elementary and Santa Clara High School, also in Oxnard, and graduated in 1961. In 1962 he entered St. John’s Seminary College and having graduated, continued his studies at St. John’s Seminary School of Theology. Bishop Ochoa was ordained a priest for the Archdiocese of Los Angeles on May 23, 1970, by Cardinal Timothy Manning. He served as Associate Pastor at St. Alphonsus Church in East Los Angeles; St. John the Baptist Church in Baldwin Park; and St. Teresa of Avila Church, Los Angeles. Bishop Ochoa was appointed Pastor of Sacred Heart Church in Los Angeles, in December, 1984. While an Associate Pastor at St. Teresa of Avila, he was named a Monsignor, Chaplain to His Holiness, in 1982.

Prior to his Ordination to the Episcopacy, in February, 1987, as Auxiliary Bishop of the Archdiocese of Los Angeles and Regional Bishop of the San Fernando Pastoral Region, he served as a board member and later as co-director of the Permanent Diaconate Program for the Archdiocese. He also headed the Secretariat for Ethnic Ministry Services. Bishop Ochoa also served as a board member for both Don Bosco Technical High School and St. John’s Seminary. On June 26, 1996, Bishop Ochoa was installed as fifth Bishop of the Diocese of El Paso in Texas.

Bishop Ochoa was installed as the fifth Bishop of the Diocese of Fresno on February 1, 2012. 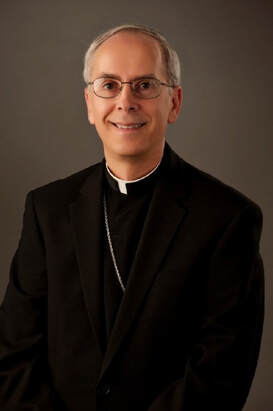